Twenty years after France won the first World Cup in its country’s history, a youthful Les Bleus side beat Croatia 4-2 in Moscow to win football’s most prestigious prize for the second time.

The French national team was crowned world champions after defeating an underdog Croatian team 4-2 in the World Cup final in Moscow on Sunday, capturing its second World Cup title and its first since it hosted the 1998 tournament 20 years ago. Les Bleus manager Didier Deschamps was the captain in 1998 when his team shocked Brazil in Paris, and on Sunday he became the third to ever win the World Cup as a player and coach.

Mandzukic heads it into his own net to give France the 1-0 lead. pic.twitter.com/LxNebIaASA 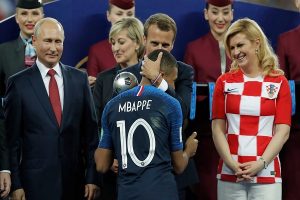 This was the highest-scoring final since 1966 and an entertaining climax a wonderful tournament deserved. In 90 high-octane minutes there was a controversial VAR decision, an own goal, record-breaking feats, a pitch invasion and an underdog pushing a heavyweight to its limit.

A  penalty-kick goal from Antoine Griezmann and goals from Paul Pogba and Kylian Mbappe were enough to lift one of the pre-tournament favorites to the title, capping off a magnificent run in the group stage and the knockout stage that featured wins over Australia, Peru, Argentina, Uruguay and Belgium. Here’s everything you need to know about Sunday’s wild final.

Didier Deschamps was their captain then and he is their coach now and became only the third man – after Germany’s Franz Beckenbauer and Brazil’s Mario Zagallo – to achieve that astonishing feat and for that his place in the pantheon of French football is secured.

25 – Only Brazil 🇧🇷 in 1970 (25 years & 9 months) have won the World Cup with a younger squad than France 🇫🇷 in 2018 (25 years & 10 months) – couting only the players who played at least one game during the edition. Succession. #FRACRO #WorldCupFinal pic.twitter.com/3omTNDl7cI

Croatia had started full of energy but fell behind when Mandzukic, who scored the extra-time winner against England in the semi-final, became the first man to score an own goal in a World Cup final when a Griezmann free kick skidded in off his head in the 18th minute.

It was the 12th own goal of the tournament.That meant it was the fourth successive knockout game that Croatia had conceded first but Perisic, who got the equalizer against England, was on hand again to level the scores 10 minutes later, smashing in a low shot after Sime Vrsaljko had headed Luka Modric’s free kick across the box.

But it was then Perisic’s turn go from hero to zero when he flapped an arm at a corner and, after a VAR review, Argentine referee Nestor Pitana awarded the 28th penalty of the tournament, another record, which Griezmann stroked home in the 38th minute for his fourth goal of Russia 2018.

That made it the highest-scoring first half since 1974, when West Germany led the Netherlands 2-1 – also the final score then.It was harsh on Croatia, who had made most of the running, and they were on top again after the break, continually winning their one-on-one duels in the air and in every tackle and forging forward in the French box with plenty of variety.

But France’s defense, so impressive all tournament, held and they went 3-1 up on the hour as Mbappe and Griezmann combined to set up Pogba on the edge of the box.

His right-footed shot was blocked but he coolly curved the rebound in with his left.After three successive extra-time knockout games the chances of another Croatian comeback seemed slight but they looked dead and buried six minutes later.

Lucas Hernandez tore down the left to set up Mbappe who drilled a low shot beyond keeper Danijel Subasic for the 19-year-old’s fourth goal of the tournament.

An awful blunder by Lloris revived Croatia, as the French keeper tried to dribble around Mandzukic only for the striker to tap the ball straight into an unguarded net.Croatia, beaten by the French in the semi-finals in their first World Cup appearance in 1998, continued to press but their energy was sapped and France safely held out for the victory.

See you all soon for more domestic football as we bring down the curtain on Russia 2018.