Croatia made nine changes from their last World Cup Group D match for the knockout match against Denmark on Sunday, reverting to the team that impressively beat Argentina 3-0.

Only captain Luka Modric and Ivan Perisic remain from the starting line-up against Iceland, the Croats’ last group match, which was played after they had already secured qualification for the last 16.

The game against Denmark takes place in the same Nizhny Novgorod stadium where Croatia thumped Argentina 10 days ago.

Sunday’s clash has been billed as a clash between two midfield artists, Real Madrid’s Modric and Denmark’s Christian Eriksen of Tottenham.

Both playmakers have been selected.

Denmark, who crawled through the qualifiers but have promised a more attacking approach for the knockout stage, make two changes.

Denmark are unbeaten in their last 18 games, stretching back to October 2016.

Starting line-ups for the World Cup last-16 tie between Croatia and Denmark in Nizhny Novgorod on Sunday (1800 GMT kick-off): 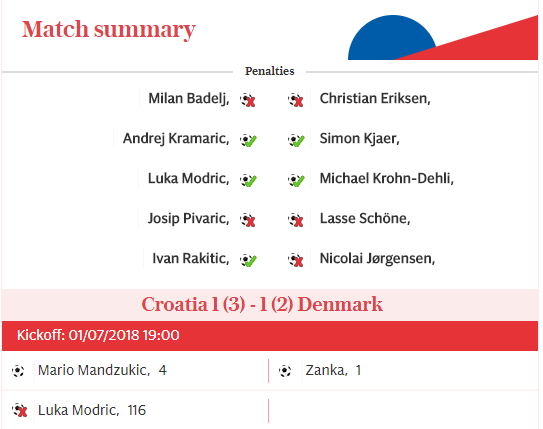 Read Also : Mbappe turns on the style to dump out Messi’s men